Wilke turned out not too bad. Did ten. Keep saying that the first feels as hard as the tenth, and vice versa. For some reason Gilbert only wanted me to do seven, and I probably should have stopped there, but it’s all the same on that beast. And odd thing, my knee actually feels better afterwards than it did before. But my calf was killing me and this morning it seeped up into my hamstring and after tempo this morning my whole right leg felt tingly and numb.

Pretty sorry of me, but I drafted behind Rich L. the whole way, and I mean drafted right behind and I mean the whole way. I feel bad about it, because I passed him as we came up on to the Riverside Drive sidewalk and outran him to the finish. Really, I fed off his energy and then took advantage of it. Kind of crappy of me. I did pull even with him at one point but he surged ahead so I thought, “fine, I’ll stay back here.” 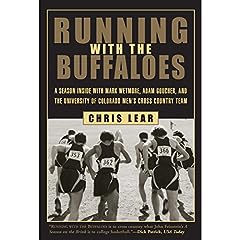 I just finished reading “Running With the Buffaloes” about the 1998 Colorado cross country team, and I thought about the book and the strategy their coach (Mark Wetmore) talks about the entire book. Basically, they train like madmen, trust in their fitness, stay back early, go easy up hills and hard after cresting, let those in front die, then surge at the end when others are struggling. I tried to do all of that today and it seemed to work. The extra miles I’m doing seem to be working too, judging by today, which is in line with the Colorado methods (although they’re doing 100 mile weeks, compared to my paltry 40 mile weeks).

The book itself is a pretty good read, but parts felt a little substandard for a “cult classic.” The typeface looked mediocre, the pictures were low quality, the writing was journalistic (much like knob). All that said, I quite enjoyed the account, even though most of it was just a rehash of their daily workouts.

Finally, being a group of humans, the gossip and social structure of the Gazelles is …. entertaining.

If I'm going to compete in "endurance" events like triathlons and road races, I should…