That RunTex article I regurgitated in my last post isn’t very clear. I finished second in 17:22, 40 seconds behind the winner who ran 16:42. He ran 16:02 in a different race on Saturday in Houston. On one thing the article is clear. I don’t have leg speed.

Going into the race I thought I’d have a chance to win based on previous years times. But I had read Wish’s column last week about some Kenyan who just moved to town, and when I saw this dude at the start line, I knew it was him and that my chances of winning were nil. It was actually kind of a relief and I figured I could have fun trying to chase him.

So I warmed up with a somewhat hard loop of the course then ran the 1K with my kids (they both did awesome). At the start the Kenyan, some guy whom I assume was the Facebook friend, and a few other guys sprinted out hard and I let them go a little bit, but I felt strong and liked my chances. Funny that within 25 meters I know how the race will go. That said, the winner was already about 20 meters ahead of me after the first 200 meters. A couple of the other guys in front looked like high school kids. One had a mohawk. Those guys always sprint out too hard and die quickly. Sure enough, I passed one, then another 1/2 mile in and was in 5th or so. Legs a little tired, steady breathing, overall working hard but feeling strong.

By the one mile mark I passed a couple more including Facebook friend and was trailing only the Kenyan (by about 10 seconds) and the eventual #3. I pass eventual #3 at about 1.5 miles, and at that point the leader was probably 20 seconds ahead. I kept him in sight the whole way but he slowly added to his lead. I thought #3 was right behind me most of the run but dared not look back. On the final turn I took a peek but didn’t see him (he finished 30 seconds back). I did see my wife jumping up and down. ;) I did another loop of the course for a cool down, then ate some birthday cake (remember the “social 5k”?). 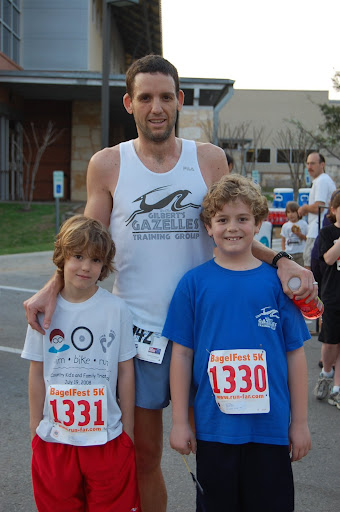 Later that afternoon, thinking about the race, the phrase “full of sound and fury; signifying nothing” kept coming to mind. At this point, I could go into yet another boring examination of the motivation and utility of running and racing, but I’ll spare you.

Later that night, I went for a recuperative four-mile trail run, though I admit partly it was just so I could hit an 80 mile week for the first time ever.

After three hard weeks and four tough days in a row, I’m taking today off. Tomorrow begins the push for the summit.

Interesting mystery. In March 2009 Jessica took this photo of her cat Mr Friday with…